In front of the biggest carriage station in Charleston, South Carolina, I was wandering, waiting for my carriage; its destination was Long Island, New York. I could barely see any woman on the street in front of the station. Wide-brimmed hats were moving among the crowd [xi]. It was totally different from the market that I walked pass. The market was occupied by women with a turban on their heads. Some of them had slaves following them around with lots of raw ingredients1. They talked, and mingled. It might be the only time of this week that they got to come out from their houses to talk to people, except going to church on Sundays. Most of the women here were under controlled comparing to women in the North [iv]. Some of them could read; some of them could write. Suddenly, the crowd in front of the station spread out, creating a path for a couple, aristocrats. A guy with a white powdered wig and shiny buckles shoes was walking with a woman with a giant satin hooped skirt, a tall wig that was made of animal hair and a hat with feathers and a fan [xi]. Her dog was walking sluggishly in front of her. Jealousy, respect and curiosity were mixing in people’s eyes. With a tall hat, a short guy in front of me said to his friend that the couple was on their “honeymoon”. I have hardly ever heard that word. People who have enough free time to go on “vacations” could only be the planters [iv]. Slaves with a bunch of crates followed them. Unsurprisingly, the path where the slaves walked passed got wider. I almost forgot that I was in Southern States.

By the time I was on the carriage, the sun was gone. Men were heading to taverns. 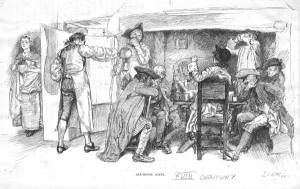 They would find their pleasure there: alcohols, chatting, games and women. I could not see any woman on the street, except the one who was working in the tavern [iv]. A group of slaves was gathering at the end of the street. It seemed to be the only time of the day when they could socialize with others. The incomprehensible lyrics came through my ears with a strange rhythm [i &iv]. The group of slaves was dancing and singing in their own language. It seemed like white culture did not dominate this vivid and powerful culture at all.

“I am doing this job, because the harvest season just finished,” the carriage rider said. “I will be doing this until the season of rice starts again.” Luckily, I got a chance to talk to the rider. Thomas Smith, a thirty three-year-old rider, came from a small farm in western Virginia. “I have been working for all my life. I would help my family when I was young by playing the game, ‘picking up the wools’ in the farm [i]. My dad sold the sheep farm in New England and moved down to Virginia. We have been cultivating rice since then.”

It took me almost two weeks to get to the state of New York. I headed to the Long Island first, where it began the era of the steamboat. Using the steamboat to Long Island, I got chance to talk to a Dutch couple. They were on a one-day vacation to Long Island. The husband wanted to go to Horse Racing, so I accompanied them to the race. At the race, the stadium was covered by wide-brimmed hats mixing with white wigs. Most of the jockeys were male African American, probably slaves, trained by their masters to be jockeys. I saw approximately one white male jockey in each round of the race [iv]. One of the horses that seemed to be interesting was “American Eclipse”. He seemed to be very superior since their first trial [iii]. 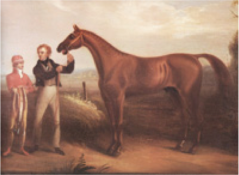 He had a complexion of light chestnut, standing 15.1 hands with a star on his forehead and a white near hind foot, with much bone and muscle. He was long and low with a moderate length neck his cannon bone measured 7 and 3/4 inches [iii]. Also, he was an American horse. The horse trade also amounted $1,377,202 since the beginning of the year [xiii]. The picture on above was a part of the performances of the horses until September 18th [xiv]. At the end of the race, the Dutch couple invited me to their house for five days in Albany. They were going to have Albany festival soon [i].

On the way to Albany on a carriage, I saw the first construction site for the Erie Canal, the first canal in the United States that was being dug by the State of New York. It started around two months ago [iv]. I stopped at a dressmaking shop, which was called, “Lambard”, for my wife. It was a small shop owned by Dolly and Barnabas Lambard. Different styles of stockings, drawers, turbans, and chemises were on display [ix]. While I was choosing, Dolly came to help me to choose the dress. “My mom liked this kind of fabric,” she said, “she always wore this when she was alive at home everyday. She never said she liked it. She was always quiet. She always wrote what she felt in her diary everyday” [v]. It seemed like women were inferior. She could not fully express hersel, so she expressed it into her diary.he was an American horse. The horse trade also amounted $1,377,202 since the beginning of the year [xiii]. The picture on the right was a part of the performances of the horses until September 18th [xiv].At the end of the race, the Dutch couple invited me to their house for five days in Albany. They were going to have Albany festival soon [i].

When I arrived at Albany, it was the first day of Pinkster festival. It was one of the most important breaks of the year. “It used to have more spirit than this,” a guy behind me said, “It has been declining now.” The meanings of the festival depended on people. The festival itself was from Dutch [xii]. It was a religious holiday for the Dutch. They would have a chance to meet their relatives from their harsh work or to go to churches. They would attend church services, important church functions like baptisms and confirmations during the festival. Neighbors visited one another, and children dyed eggs and ate gingerbread [xii]. The culture of African American had influenced the festival. Slaves would enjoy the music, singing and dancing in the town. Their parade was on the street of Albany [i]. Slaves who were separated from their families or friends would get to come back home. They enjoyed their temporary independence, the independence that was unreal.

i.         Recreation, Leisure and Family Life: from http://www2.lhric.org/pst/shms/tnfamily.htm

ii.         Transportaion Developments in the Early Republic: from http://www.connerprairie.org/learn-and-do/indiana-history/america-1800-1860/travel-and-transportation.aspx

xii.         Pinkster is a holiday that was celebrated over several days by African and Dutch New Yorkers throughout the 1700s:from http://www.hudsonvalley.org/education/pinkster